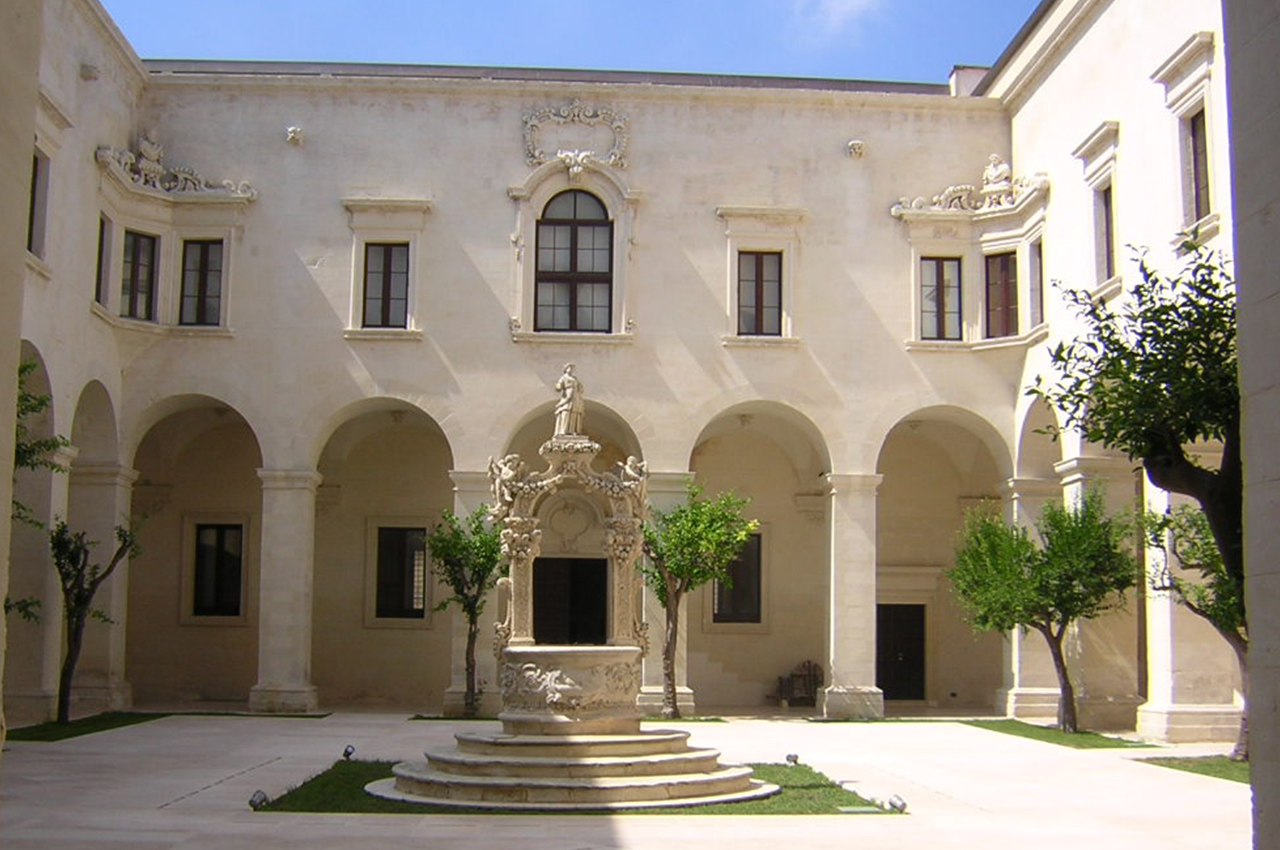 An intense and fascinating journey into the history and sacred art of Lecce. LecceEcclesiae is the path in the heart of the historic center, between the different sites of the curia that makes the churches and their goods accessible, every day non-stop. A service commissioned by the Archdiocese of Lecce and created by the Art Work social cooperative which makes general information available on websites and audio guides.

The route can start from the "living room of Lecce", Piazza Duomo, where on the two propylaea at the entrance, built at the behest of Bishop Sozy Carafa, Sant'Oronzo, Sant'Irene and Santa Venera on one side and the Fathers of the Church on the other, welcome visitors by defining a new perspective on the space that introduces them to an almost theatrical scenario.

The sites are open every day: from October to March 9 am-6pm; from April to September 9 am-9pm.

The Central Ticket Office and Infopoint of LeccEcclesiae is located inside the Antico Seminario, in Piazza Duomo. Here you can buy entrance tickets by paying in cash or by credit / debit card.

With your back to the spectacular entrance, your gaze immediately rests on the front facade but, although it is actually more sumptuous in its decorations, this is not the main entrance. The real entrance, in fact, is the one on the right side of the building, that is the one that faces in front of the Bishopric and it is worth approaching it, because the bronze door was remade on the occasion of the Jubilee of 2000 by the sculptor Armando Marrocco (transplanted from Lecce in Milan), immortalizing the scene of Pope Wojtyla's visit to Lecce in September 1994. The Cathedral stands on the remains of previous churches, the first built in 1114 and the second in 1268. Giuseppe Zimbalo was called to reconstruct the largest and most sumptuous building, certainly the most important architect and sculptor of the time.

It was Bishop Michele Pignatelli who wanted the seminary to be erected. The works began in 1694 and the ribbon cutting in 1709; only in 1729 was the attic floor added. The beautiful ashlar facade, with its extraordinary decorations, is the work of Giuseppe Cino, the stonemason-architect who was responsible for some of the wonders of the Lecce Baroque. However, it is necessary to cross the door and enter the cloister to be able to appreciate the talent that reached the pinnacle of refinement in the creation of the small well, also called "true oval", a Baroque masterpiece of stone lace which, at first glance, suggests a basket full of fruits.

From the cool of the arcades of the seminary you can access the essence of sacred art. The first floor embraces the art gallery and contemporary sacred art gallery, also hosting the Innocentian library. The museum of sacred art collects works, vestments and silver that tell the history of the diocese of Lecce from the fifteenth to the eighteenth century, while the contemporary sacred art gallery, on the ground floor, offers a significant cross-section of the current artistic ferment declined to the sacred.

Lecce is a synthesis of eras and cultures, of people and styles. It is also for this reason that the Baroque represents it and the stone modeled by the stonecutters is nothing more than the mirror of their joy, of thoughts, of ancestral fears. The basilica of Santa Croce is its emblem. To reach it from piazza Sant'Oronzo, crossing via Matteotti and following the narrow via Umberto I, the road suddenly widens to become a rectangular square. On the right, the baroque facade of Santa Croce, with its sculptures and the splendid rose window, leaves you breathless.

Built starting from 1549 and finished in 1646, Santa Croce involved Gabriele Riccardi, Francesco Antonio Zimbalo, Cesare Penna and Giuseppe Zimbalo. The Basilica is considered one of the greatest examples of the Lecce Baroque, because the imagination shapes the docile stone giving life to images and visions. And when the sun, yellow in the early morning, or with warm red colors at sunset, illuminates it, insinuating itself between the scrolls, one is enchanted to watch telamons, lions, dragons, griffins and cherubs embracing the symbols of temporal and spiritual power. Above, the Celestine coat of arms encloses a cross, symbol of the triumph of the Church.

The church of San Matteo di Lecce is an unusual flash of Roman baroque. Its façade with concave and convex volumes leads back to the architectures of Francesco Borromini and, in fact, was built in the second half of the seventeenth century on the designs of his nephew Achille Larducci di Salò. But it was probably Giuseppe Zimbalo, after Larducci's death, who completed the facade. The interior, on the other hand, with its particular elliptical plan, presents all the elements of the Lecce Baroque with the richly worked altars attributed to the school of Giuseppe Cino, separated by pillars with the twelve apostles by the sculptor Placido Buffelli. The church of San Matteo is located in via dei Perroni at number 29.

The refined touch of Giuseppe Cino's hand can also be seen in this church annexed to the convent of the Poor Clares. The façade marked by convex volumes is embellished with vegetable decorations and plump angels, as well as by pilaster columns and niches surmounted by scrolls and medallions. The interior, with its particular octagonal plan, culminates its perspective effect in the presbytery with a star vault. The church is in piazza Vittorio Emanuele II.